The Lost Ship in the Sky Revealed (Updated) 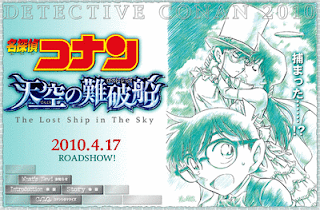 The official website for the anime films based on Gosho Aoyama's Detective Conan manga has announced that the 14th film, Detective Conan: The Lost Ship in The Sky, will open in Japan on April 17. The website promises that Conan, a brilliant detective trapped in a child's body, will face his rival Kid the Phantom Thief in the new film. This is the first film in which Rikiya Koyama replaces Akira Kamiyaas the voice of the character Kogoro Mouri after Kamiyaleft the role in September.
In the film's story, Kid has his eyes set on the "Lady of the Sky" jewel aboard Bell 3, the largest airship in the world. However, a mysterious terrorist gorup called Red Shamu-neko has hijacked the airship itself, along with Conan and his allies Kogoro and Ran.
This year's Detective Conan: The Raven Chaser film set the franchise record for attendance and earned over 3.4 billion yen (about US$35 million). The first 12 films were seen over 25 million times in theaters.
Image © 2010 Gosho Aoyama/Detective Conan Production Committee
Update: Viz Media is releasing the original manga in North America under the name Case Closed, and FUNimation Entertainment shipped DVDs for the television anime adaptation and some of the earlier films.
Source: Anime News Network
Posted by Officer Kaoko at 4:23 PM